Potentiometers are usually referred to as variable resistors. A potentiometer can be seen as a special resistor you can easily change the value of.

If you don’t know what a potentiometer is, I can tell you for sure that you have used one many times. For example, when you are turning your radio’s volume knob, you are actually adjusting a potentiometer. Potentiometers are very common in electronics.

Some special materials can show a resistance value even if you take a very short piece and take a measure from one end to another. Those are the materials that make a potentiometer work. They are called resistive materials.

Lets take a strip of such a material and let’s take some measures. Let’s imagine to put one probe of a multimeter in A, and the other in B. We are keeping the A probe fixed, and we are moving the probe in B.

As long as the length gets bigger, the resistance value gets bigger accordingly. And that happens even if the distance from A to C is VERY short.

B is a moving contact called a pointer, or wiper.

On linear potentiometers, resistance values change according to a linear law. So, if AB resistance increases, BC resistance decreases. But their sum is always the same, and equals the resistance between A and C.

If you get B very close to A, finally making A and B the same point, the resistance value will go to 0 ohms. So, a 500 K ohm pot will give you a resistance value ranging from 0 to 500 K between A and B (or, between C and B).

Usually, pots are ring-shaped, but the concept is right the same. Instead of moving the B pointer across a line, you move it across a “circumference” made of that special material. Adjusting is a matter of rotating a knob or a small screwdriver.

For volume adjustment, logarithmic potentiometers are used. They are similar to linear ones, but the resistance value change according to a logarithmic law.

AN EXAMPLE FROM A REAL CIRCUIT

As an example, let’s take a look at the vintage Atari 2600 game console colour adjustment circuitry. 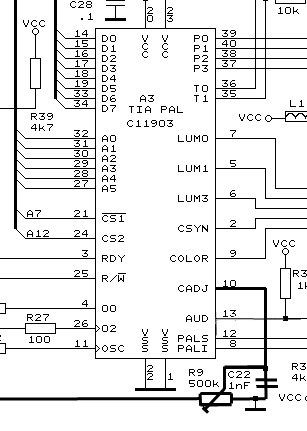 Pin 10 of the graphics and sound TIA chip is used for colour adjustment. As you can see, a 500 K pot is part of the circuitry (R9, 500K, to the bottom of the picture). You can fine tune the colours on the screen by adjusting this pot. As all terminals are connected, when you rotate the pointer B, you are actually changing two resistors values. If values are very off, you get only a grey scale image (no colors). If values are close to the right ones, you get incorrect colors. And finally, with a very fine tuning you get the right colors.

To make things clearer, you could actually replace the potentiometer on your Atari 2600 system with two resistors. The only problem is that it would be hard to find the right ones, as you would need exact values to get fine colours. But ideally, that would work just great. That was just to finally point out that a pot is actually two variable resistors.

One Reply to “Introducing potentiometers: how they work”