Freaky Fish has been released a few days ago (28/08/2020) and it is the deluxe version of a 4K game released a couple of years ago. Even if you’ve already played the earlier version of Freaky Fish, you are still more than adviced to play this one as it has been vastly improved.

In Freaky Fish, you play the role of Jacques the Shark, a French fish that came back to save their fishy friends from Skeeter the fisherman, a crazy man amusing himself at throwing bombs to fishes. Such cruel and useless, isn’t it?

Game graphics is quite good. Landscapes are nothing special but sprites are more than excellent. Hi-res sprites are overlaid to create multicolor detailed sprites. Also sprite animations are quite convincing. Those fishes are just nice and well drawn. 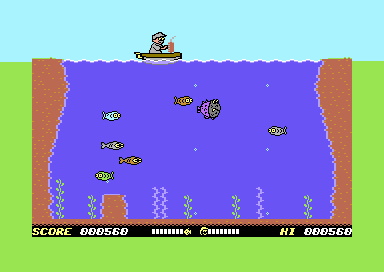 Gameplay get’s you really involved in the game. You have the ability of creating very big bubbles, and with these you have to catch each bomb and let it go on the surface. To defeat Skeeter, the bomb must hit his boat several times.

But it’s more than that. You’ll find yourself very busy in the effort of understanding when Skeeter turns off the bomb, pushing fishes away from the bombs, and deciding at what distance you have to stay from the boat to better catch the bombs. And at times, you must take the tragic decision whether getting hit to save a fish or just let him die. 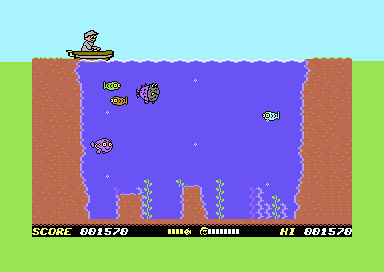 To pass a level, at least one fish must survive and Skeeter boat must be destroyed. But to get good scoring you have to try and save as many fishes as possible.

Every now and then Skeeter throws in the water some sort of energy drinks. You have to catch those cans – but be fast! – to regain lost energy. But it’s not that easy – some cans must be avoided. 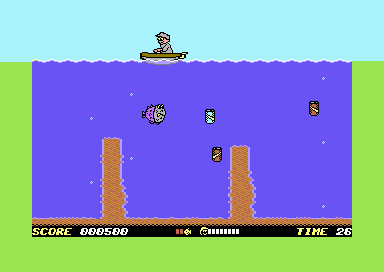 Overall the game is quite good. I didn’t manage to go up on levels, but from what I’ve seen I am more than intrigued by this game. On the down side, background graphics may be boring in the long term. But what’s most important here is sprites, and those are perfect.

Difficulty increases through levels and it’s quite high, at least for a less than average gamer like me. 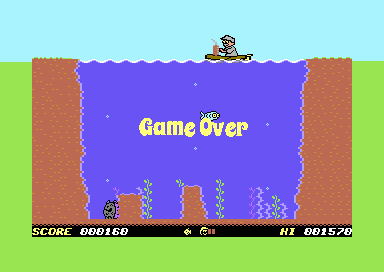 The game lacks in-game music, but effects are good enough. By the way, we have an intro music, a title-screen music and a bonus screen music. All are quite good, but happier tunes would have been more suitable for this kind of game in my humble opinion. The title screen tune is indeed very charming with a classy rhythm and some oriental feeling. 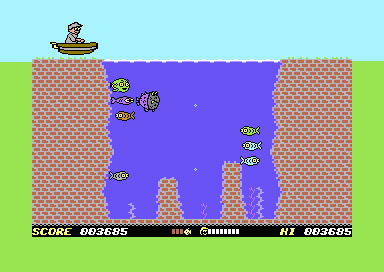 In conclusion, this is a must play game and if you have children I think they will spend hours on it! Of course, if you already managed to get them hooked up by the Commodore 64…