While writing a simple C64 BASIC “game”, I came across some little issues dealing with formatting numbers and updating information on the screen. As info must be kept updated  with no screen flickering and with no potential garbage collection issues, some simple special techniques were needed.

So, C64 built-in BASIC prints numbers with no special formatting. But, a space is always put at the beginning of any number. And when converting an integer or real number to string, that space is kept.

Suppose we must print score (or time) using a fixed length of four digits.

If we are happy with leading zeroes, we can accept a thing such as:

Although functional, the above code is quite inefficient. Of course, we could make some improvements (for instance, evaluating the STR$ function only once, using a variable), but  the point is, the above code is not quite straightforward.

But, we can use a trick. If we want the score to be four digits at max, we can just set initial score to 10000 instead of zero. If we only print four digits from the right, the initial score will be just zero. And as long as we add points, everything will work just nicely. For instance, we will print the value 100, but in memory we will have the value 10100. If the number printed on screen exceeds 9999, it will wrap around to zero on the screen, but in memory it will be 20000. Here is how we may code it: 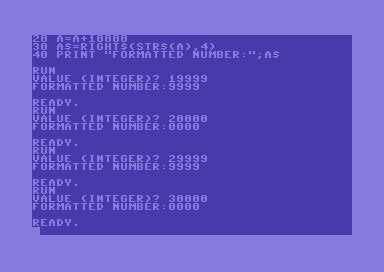 As far as I can see, we should use another approach. Suppose we are not interested on leading zeros. We just want the number to be printed starting from the same position. Taking advantage of Commodore BASIC control characters seems a better solution in this case.

Let’s imagine our score keeps growing. Then, the following code will print score always starting from the same character position on the screen:

Things work fine because the number is always increasing. So, new digits are always guaranteed to overwrite old numbers. As a result, numbers being printed are always correct and there is no visible flickering as well.

Things will not work, however, if we are printing a timer going towards zero:

Some old digits are not updated, so printed numbers at the end are bigger than the actual values.  To fix the problem, we can use spaces: 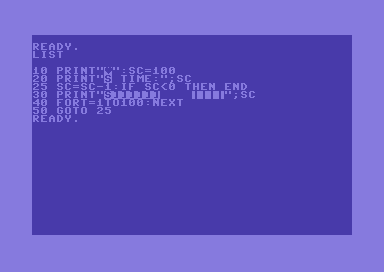 Now, printed numbers are correct, but we see some flickering. This is due to the fact that numbers are deleted with spaces, then printed again.

But, we know from my BASIC chessboard scrollers and other routines presented here, that we can use the instruction WAIT to update information while the rasterbeam is out of the viewable area, avoiding flickers. The following code will do:

As the program is short, a little pause between WAIT and PRINT statements is required. Otherwise, flickering will happen. However, bigger BASIC programs will run slower, so that pause may be not needed on them.

Missing the leading zeros? It may be the case, as they are used on most games for scores and time. If we still want to avoid using string functions, the fix is not straight, but it can be done. We just have to change the starting character position according to the size of the number. And, as we don’t want any potential slow garbage collection issue, we will create a little array for control characters, then update an index, thus avoiding string variables assignments. 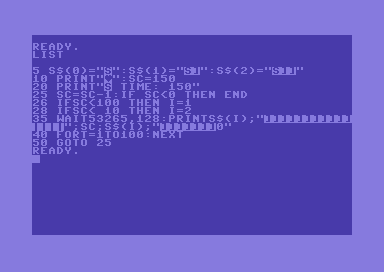 You can directly paste the program in VICE. After you run the program, you will see that the string pointer will have the original value. So, there is no memory waste and there are no potentially slow garbage collection issues either. Of course, the content of variable A$ will NOT be preserved. As long as other strings will be created, its content will get corrupted. But, since we are regarding it as a temporary string (we just need to print it once), it just doesn’t matter.

So, the following version offers simple code with no garbage collection concerns:

This article is intended as a companion to my previous article "Programming sprites on the Commodore ...

THT IC sockets: a comparison between them and how to use

IC sockets make it possible to replace a chip with ease. No need to desolder the chip, you can just ...

My Amstrad CPC 464, first tests and some pictures. PSU and a simple monochrome video cable.

I have recently bought this nice Amstrad CPC 464 computer. So, I was able to update my article on 8 ...