Following a request by a reader (Kick Off), I have had a quick look at how to draw tilted ellipses. Since I’m having not much spare time available lately, I am only going to present a very simple BASIC V2 implementation. Of course, assembly is much more suitable for graphics, but machine language coding takes a lot more time to me.

My reader suggested this problem: drawing an atom. So, we will have to draw the nucleus, the electrons and their orbits. At the moment, we will only deal with a static drawing, so no animation.

However, we are not interested on speed now: we just have to grasp the principles. Then, those interested on coding a machine language implementation will find useful information on this blog if they need it. The “Sphere” program is a good starting point I believe.

For our program, we are going to use the parametric equations of a tilted ellipse:

​​\( a \in [0, \: 2 \pi] \)​ is the angle used to draw the ellipse. Each point of the ellipse matches a value of this angle. So, this angle obviously keeps changing while the ellipse is being drawn.

​\( \theta \)​: this angle tells us how much the ellipse is tilted. While drawing each ellipse, this angle doesn’t change.

The above formulas are quite heavy for BASIC and they do take a lot of time for computations. On a machine language implementation, Werner’s formulas can be of help. But with BASIC, if we use them to reduce the number of multiplications, things get even slower. So, we will keep the formulas in this form. We only need to add the X, Y center coordinates of the bitmap screen to the terms. This is done in the code.

Instead of drawing each ellipse on a single FOR… NEXT cycle, we will precalculate a small number of points, then we will draw them. Once they are drawn, we will precalculate another set of points and we will draw it, and so on. Plotted points will be quite distant from one another: this way, even if we plot very few points at the beginning, the shape of the ellipse will be already evident. Then, as soon as we plot more points, they will get closer and closer, and the ellipse will “soon” reveal its final shape.

This approach makes the slowness of BASIC V2 hi-res graphics routines more acceptable. Of course, if you are using an emulator, warp-mode really helps anyway.

Here is how this weird atom looks: 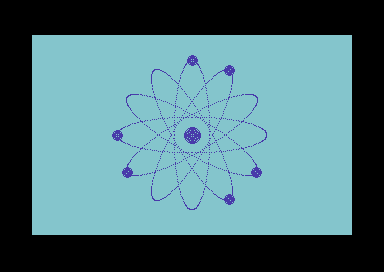 To make things simple, I have only used bitmap mode. Sprites may be an option on an improved version.

The drawing is made up of six ellipses and makes heavy use of mirroring techniques to improve performances. Still, please consider that this program is more for concepts than for speed (so, you are advised to use warp mode). The program takes a couple of minutes to complete.

The two last ellipses drawn by the program are not tilted and could be drawn by using simpler formulas. Still, I wanted to test the formulas above for horizontal and vertical ellipses as well.

Circles are drawn by using an algorithm from Commodore Hacking, issue 9.

A cheap and easy way to draw pseudo-filled circles is to just draw several concentric circumferences very close to each other. This is what the program does. There is some discontinuity, but it may be acceptable and after all, it acts as a sort of “shading”. Since circles are small, this rude technique works decently here.

NOTE: once this program has been executed, please turn your machine off then back on before attempting loading another program. This is required since pointers are changed to clear the bitmap screen fast. This is also the case with my other BASIC V2 bitmap graphics programs.

A better use of symmetry

The following improved version will make a better use of symmetry:

As you can see, now the last two ellipses are also drawn at the same time. If you have an object with X (or Y) axis symmetry, you can obtain the same object with Y (or X) symmetry by simply swapping X and Y coordinates of points.

Please note that center points coordinates must be adjusted while performing that kind of swap. This is accomplished in line 436.