We will have a look at how to merge two BASIC programs together on the Commodore 64, but it’s fairly easy to adapt the following procedure to other Commodore computers.

Please notice that this procedure will work only if the two programs to merge don’t have common line numbers.

What we need to know

Locations 43 and 44 decimal hold the low byte and the high byte of BASIC start address. This is the memory address a BASIC program starts from.

It’s very important to remember that with the command LOAD”PROGRAM NAME”,8 a program will be always loaded starting from the address on locations 43 and 44. The command LOAD”PROGRAM NAME”,8,1 will load the program from the address that can be found in the program file instead. So, as we will see in a moment, we must omit the secondary address (1).

Since we need to merge PROGRAM 1 (currently in memory) and PROGRAM 2 (to be loaded) together, we must load PROGRAM 2 starting from address SOV-2. This way, we will overwrite the two bytes signaling the end of PROGRAM 1. 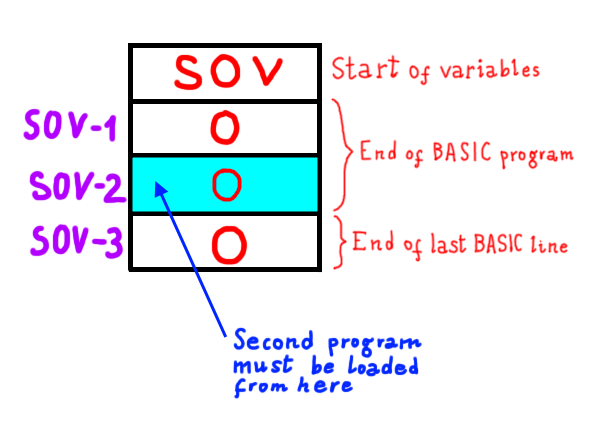 Starting from low byte (location 45) and high byte (from location 46), we now have the actual Start of Variables address on variable SV.

As in the previous picture, we need to load PROGRAM 2 from SOV-2. So, we must use the loading address:

Since using LOAD”PROGRAM NAME”,8 will load the program on memory starting from the address on locations 43 and 44, we now need the commands:

At this point, we can load PROGRAM 2:

We are nearly done. But since we need a big program made up of PROGRAM 1 and PROGRAM 2, we must tell the BASIC interpreter that the whole program starts from the standard address 2049 decimal, which is where PROGRAM 1 starts from:

We are done. Now we have in memory a big program made up of PROGRAM 1 and PROGRAM 2 merged together. It can be saved as usual.

Several Commodore 64 games use color bars to achieve the illusion of a moving landscape. Even other ...