Thunder Blade was an excellent arcade game developed by Sega in 1987. For that era, it offered an incredibly fast 3D action. The game on its own was not that original, just a standard shoot-’em-up. You are controlling an helicopter and you simply have to obliterate anything moving around you. But what made this game so intriguing was the ability to offer different perspective views. Some parts of the game offer a top perspective view, other parts offer a front perspective view. A standard bird’s eye view is also provided at the end of each level, which is what most arcade games offered at that time. Any part of each level has its own view.

On the Commodore 64, programmer Chris Butler managed to keep all of this intact. Despite the arcade game was quite advanced when it was released, the Commodore 64 European version definitely managed to retain the feelings of the original game. 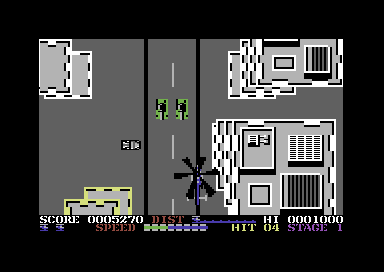 The top perspective view works really well on the C64 version. Buildings seen from the top enjoy a good 3D effect. Although a little jerky, overall quality of objects motion is really high. A clever use of programmable characters successfully provides the speed needed for 3D on such a fast action based game.

The front view also works nicely, although the really fast action – coupled with the obvious limits of the 3D engine – makes avoiding enemy fire and landscape elements really challenging at times. But, after some practice you actually realize that things work very well and that you can successfully dodge enemies and buildings – and then you get a lot of fun. Movements are not perfectly smooth, but they’re smooth enough to be enjoyable. But, given it’s an 8 bit conversion, you can just forget the little imperfection and deeply enjoy the overall excellent performance of Butler’s coding. 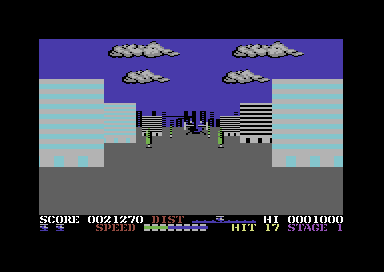 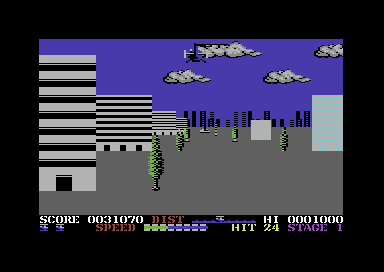 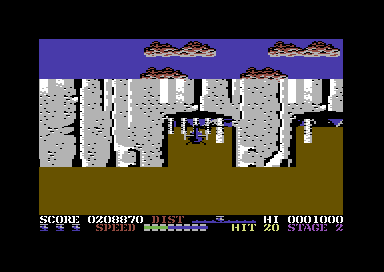 Difficulty is set at a rather high level, although experienced players can beat the game- but not with little efforts.

The in-game music is quite nice and somehow gives you motivation. Arrangements are catchy and arps sound great – the tune just has that action movie feeling in it. Drums are a bit too crude maybe, but otherwise instruments are quite good. It’s a good rendition of one of the original arcade musics. Of course, given the C64 limits, the game can’t  offer all the musics available on the original game.

The final part of each level (four total levels available) requires you to destroy the firing devices of a big war machine. Graphics is detailed and scrolling is smooth. 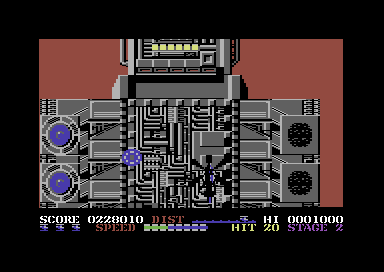 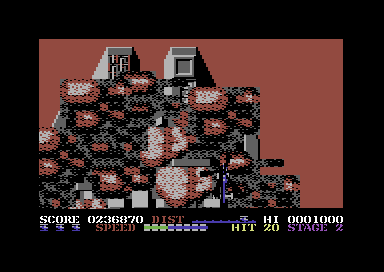 What I definitely like on this game is the way choices have been taken for development. Such a difficult port could have been easily a disaster, but everything has been balanced wisely. You don’t have blocky sprites here – expanded sprites have been used with care. For instance, enemy shots during the front view game action are made up of multicolor expanded sprites, but their shape is simple so you don’t notice the big pixels they are made up of.

Although the game requires many moving objects, you don’t have any flickering sprites as well.

Sometimes graphics appears a little chunky (look at explosions for instance, you can clearly see they are made up of more 8 x 8 blocks put together) – this is difficult to avoid when using some techniques based on programmable characters – but the action is so fast that most imperfections are quite difficult to notice while playing the game. Perspective effects and scaling effects all work. And given the complexity of the original 3D hardware engine of the arcade machine, that was certainly not to be taken for granted.

The game goes on fast, it’s fun to play, graphics is good looking and it features a nice music that keeps you company while playing. So, even on the little Commodore 64, the original arcade feeling is there.