Released by Taito in 1987, Rainbow Islands was an arcade game that enjoyed a huge success. It is the sequel of Bubble Bubble and as such you still have to kill weird creatures. But, instead of bubbles you now have rainbows, which are used both as a weapon and as a “ladder”, allowing you to go up on platforms (conventional jumping is also allowed). Rainbows can be fired directly on the enemies, or you can make them fall on the enemies themselves. This did sound quite original at the time (and still does today).

The action is fast, there are several levels to complete, and the screen is literaly full of objects (enemies, bonuses, rainbows…). Backgrounds are scrolling as you go up to the top of each island. 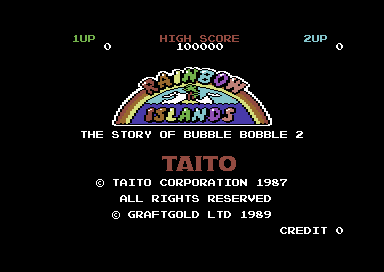 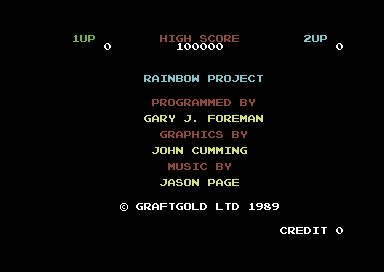 The Commodore 64 conversion arrived in 1989. Maybe a bit late, but the result was certainly worth the wait. This port is for sure a success. It retains virtually all the features of the arcade version and it plays extremely well. Action is fast and smooth, graphics are excellent and music is nice (but repetitive). 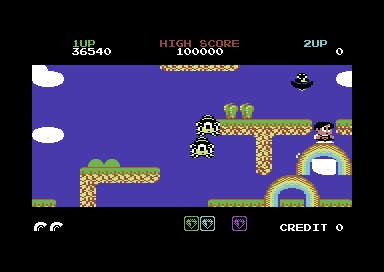 The game just grows on you quickly, and you are hooked up. Levels become harder and harder as you make your path on the islands, and final bosses get more challenging. I think the game is set to a quite high difficulty level, and to be honest I am struggling to go ahead decently even with a trainer. But I have to say I didn’t have this game at the time the Commodore 64 was my main computer. The game just requires a lot of spare time, something that is actually lacking nowadays for most of us. 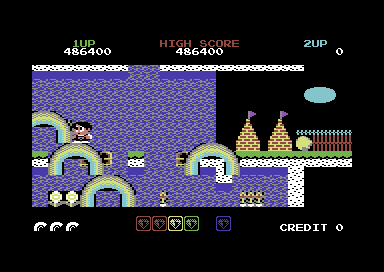 Still, I do find the game neat and  intriguing, and it’s a pleasure to play it. The coder did a great job – despite the huge number of elements on screen there is no flicker on in-game sprites and you don’t have blocky objects either (diamonds collected may flicker instead). Take a look at the final boss of the first island for instance: it is big, but it is detailed. It is made up of unexpanded sprites put together, the best solution for creating a neat-looking big sprite. 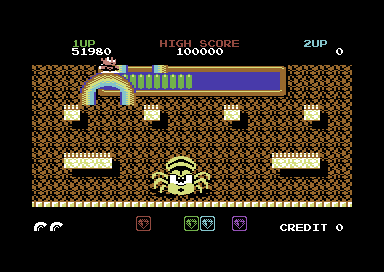 Programmable characters have been used wisely and you hardly notice any artifacts when different objects overlap. Some bonus objects may clash with bushes, when many rainbows are falling you can notice some clash as well, but that’s nothing relevant. Given the speed of the game, you just can’t notice it on most cases. 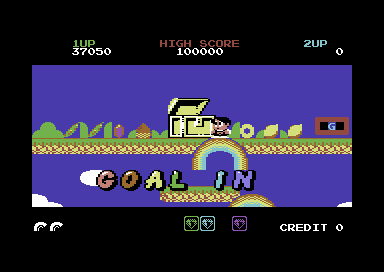 Colors are very well choosen as well, and you get a strong cartoonish feeling. I also appreciate the fact that multicolor and hi-res characters are mixed together. For instance, clouds are in high resolution, platforms and bonus items are in multicolor. This is quite straight to do and doesn’t require any trick (it’s a standard VIC-II feature). Still, this is oddly rarely seen on C64 games. Technically speaking, this is one of the best C64 games ever made in my opinion. 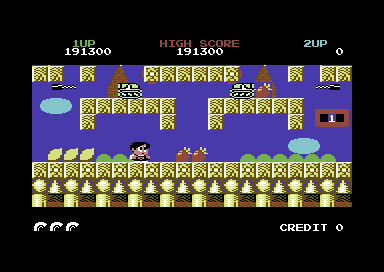 This game is not a simple shoot-’em-up. You  need strategy as there are many things to decide. Sometimes, it is better to simply jump on platforms. On some cases, using your rainbows to quickly go up seems the best solution. To kill the bosses, you have to work up a method. Furthermore, you can increase your killing power by collecting special items, that will allow you to “fire” more than one rainbow at a time. And you have to be quick, as each level must be completed within a limited amount of time. Otherwise, water will rise and you will die (remember, you are on unfriendly islands). 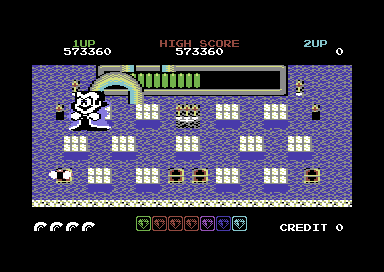 Insects, birds, strange vehicles driven by evil creatures… the game just doesn’t put any limit to your fantasy and there’s a lot of variation. Some enemies only kill you by touching you, others are able to fire at you instead. All of this just makes the game always fresh and despite the difficulty level you are somehow encouraged to try and improve your skills to go further and further. This is what may be called “addictive”.

If you still enjoy watching cartoons sometimes and you like the Commodore 64 like I do this is definitely a game to play. And even if you don’t like the game because you may find it childish, you can for sure enjoy it technically. All those rainbows that you can quickly create and the ability to climb on them all is something amazing for an 8 bit system – pure coding talent.