The Commodore 64 version is quite convincing, although it doesn’t have all the features that can be found in the original game. Action is not as fast for instance, and some details are missing. More on that later.

The game is not that original, as it is the usual shoot-’em-up war game. You are a brave soldier meant to kill a lot of terrorists. They have a huge amount of weapons, tanks, helicopters and airplanes. Furthermore, you will meet some special war machine at the end of each level. There are five levels, and each one is made up of four sections.

With your joystick, you can control both your soldier and the gunsight. The spacebar is used to fire bombs. Controls are quite precise and that allows for good playability.

This game has a great play area, as information are cleverly shown using the borders. Score, lives, the number of bombs left and the status bar are all shown there. The status bar tells about how many enemies are still left to kill. As soon as you kill enemies, the status bar keeps growing. Whenever it gets full, the current section has been completed. 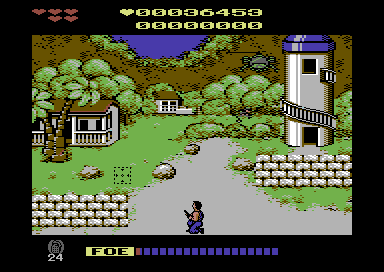 Graphics is cool. It’s nothing special, but everything looks very fine. Colors have been used properly. Landscapes have been drawn very well, and the same goes for the main character – which both enjoys colors and details, thanks to the sprite overlaying technique.

Some enemy soldiers are a bit blocky, but the way they look is more than fine overall. On the other hand, helicopters and tanks look good. 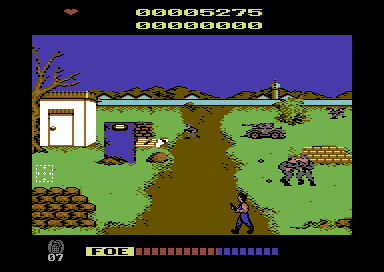 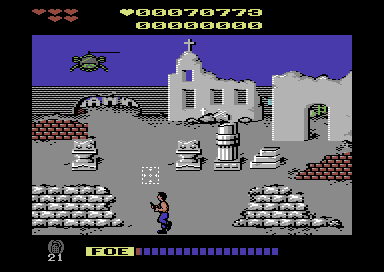 This is not a dull shoot-’em-up. You have many scenarios to explore. Furthermore, you realize that some techniques must be learnt in order to go on effectively with the game. For instance, there are different ways of getting additional bombs – and you will need them. On some phases of the game, you end up with a lot of enemy bullets flying on the screen, but you soon learn the way to avoid them. Bonus weapons are of great help to kill your enemies faster. In particular, they can also destroy tanks fast, so that you can save bombs. Nevertheless, it may be quite difficult to have many bombs left towards the end of the game. 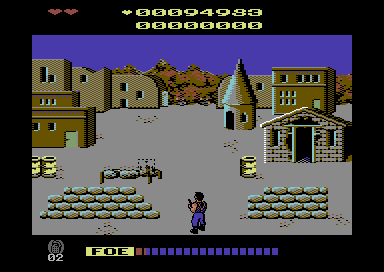 “Bosses” at the end of each level may be a bit tough to destroy. Bombs are really useful against them, but sometimes you just don’t have enough left and you have to rely on your repeater. Be careful: if a boss kills you, the status bar will be reset. That calls for very great care when dealing with those final enemies – otherwise many time and lives will be needed to destroy them. 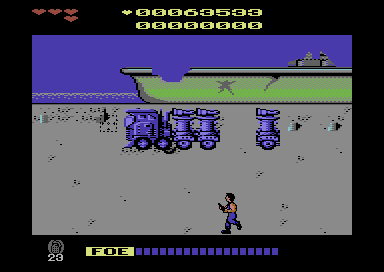 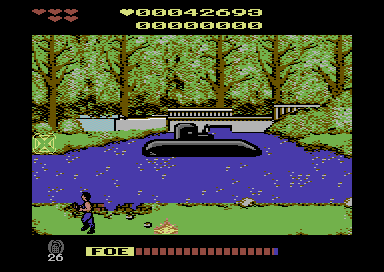 The game doesn’t play very fast, but you have to look at many parts of the screen – your enemies are definitely going to keep you very busy. Concentrating on a single part of the screen for too much is just not allowed here. Bullets fly a bit slowly on the screen and that doesn’t feel very natural. Still, there are many of them most of the time so the game will be frenetic anyway.

Most animations are very good – I especially like the way submarine warriors are animated.

There is no in-game music, but sound effects are good. The intro screen does feature music however, and it is a very good one (it has excellent military-feeling drums, the bass line is simple but catchy).

The game plays really well and it is nicely addictive. Some features from the arcade are missing however. Your soldier cannot perform the emergency roll move. Furthermore, he doesn’t celebrate his victory with the funny jumps he performs in the arcade version. But, I think those are little details, and that the overall quality of this conversion is extremely high.

The game is set to a high difficulty level but still, it can be completed. I did manage to complete the game when I was a child. I gave it a go this morning before writing this review, but I reached the end boss in very bad conditions, as you may see from the following pictures. 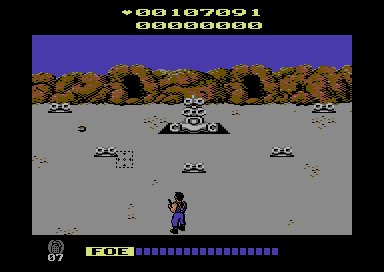 I think this is an extremely good Commodore 64 game. It is based on fixed screens, but that doesn’t prevent the game to be challenging. It is fun and it shows off the good way of handling Commodore 64 sprites. There are big sprites, but they are never too blocky. This is a must for any Commodore 64 player. Enjoy!

Today I have fixed a 250469 board Commodore 64 C which was plagued with intermittant operation. The ...