Deliverance is a sequel to the game Stormlord and was released in 1990. It’s a difficult game with a very nice intro music by Matt Gray. I really like Matt Gray’s music. Strong drums, catchy bass lines, combined with a nice use of arps and good leads. With that awesome hard rock feeling. 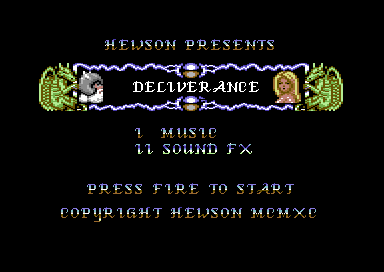 I do also appreciate the songs from Last Ninja 2 and the epic tune from the Freescape game Driller. Driller music literally astonished me when I was a child, and it still does.

I never played the game Deliverance but I did listen the intro tune from the HVSC and felt in love with it. One year ago I started to do a cover of that song with Goattracker, but I stopped to work on it a few days later.

I have now resumed working on that tune and the cover is now finished.  Again, I am going to share the .sng Goattracker file as I think it may be of interest to those learning Goattracker. Take it as an humble example for beginners.

You can download the .sng file here. The SID file is also available. Please note that the song is 2x and an 8580 SID is required. So please set Goattracker properly to listen to it.

I didn’t manage to get bass and drums as good as Matt Gray did of course, but I added something new that you may like. I added a melody from a level music of the game Last Ninja 2.

The original musician uses mixed instruments in order to have bass and hit hat on the same channel. Snares are on another channel, along with an accompaniment melody. The snares are fitted with the accompaniment melody by cutting some notes of it. You may realize it if you listen very carefully. The accompaniment melody from the beginning starts to miss some notes when drums are introduced. Drums are just replacing those notes. But, after being listening to that melody several times on its integral form, you hardly notice that some notes are actually missing. This is one of the tricks used in SID music to cope with the three channel limit.

The experiment I wanted to try was to force at a certain point bass, hit hat and drums all in the same channel, in order to have arps and the main melody being played together. The original song never plays arps and the main melody at the same time instead. Well, I wanted to try that. To do this, I had to shrink sounds a bit. The result is that drums are much weaker than the original song, but this is the price I had to pay to add more things.

At the beginning, there are two bass lines playing together. The third channel is used for a repetitive melody. Please note the command “5B6” used on some notes on track 02. It is used to obtain a very simple echo effect. If you play a note at full volume, then you suddenly play that note at a lower volume, you may get an echo feeling. Of course, the effect works only if the “ghost note” volume level is set properly. On the SID, you can’t set the volume for each channel, you only have a common volume level for all channels. But, you can use ADSR settings to do that. The command “5B6” (actually, 5 is the command, B6 are parameters) forces Attack to B and Decay to 6. A slow attack combined with a low decay level causes a note to be played at a lower volume. That’s just what we wanted. Try to play track 02 alone to ear the echo effect better.

On track 3, a melody is played with instrument 04 (pad). If you look at the wavetable of the instrument, you can see that I have used different waveforms (43, 41 and 11). 43 is pulse wave with synchronization. The sound is syncrhonized with the sound being played on channel 1.That adds a “scratchy” feeling at the beginning of instrument 4 notes. Waveforms 43 and 41 just play the notes on the track unchanged. Triangle waveform value (11), is followed by the value 18. It’s a relative pitch value and it means: two octaves up. If you listen carefully to instrument 4, you may ear some “belly” sounds: those are produced by the two octave up triangle wave.

On track 05, the lead instrument is introduced (I called it “violin”, but it doesn’t rensemble it much). Some notes have the command “300”: it is legato. It is used to have no interruption beetween notes.

If you look at the pulsetable, the duty cycle changes very quickly while notes are played. This is useful to obtain “string ensemble”-like sounds.

I also played with filters in this instrument. As you can see from the filter table, I am changing the cut frequency in a loop. It stays fixed for 10 ticks, then it starts changing.

This is sometimes used to get richer sounds. Of course, it’s a matter of taste.

As you can see by looking carefully at  track 05, echos are used here as well.

From track 0D, bend pitch is used on notes. It allows to change the pitch of a note while it is being played. It makes it possible to obtain a rise and fall feeling. You can determine how fast the pitch must change. You can use the command “3” on the notes, followed by the pointer to the speed table. So, the command “303” means: refer to entry 03 of the speed table to do the bend pitch. As you may see from entry 03, the speed is entered on the number to the right of the table entry.

On track 12 and 19, you can see the “sound multiplexing” to fit drums along with bass and arps. We already know this technique from this article. On track 19, I also mixed arps with a very soft white noise snare. This is needed to have stronger snares, adding together the two kind of snares from track 12 and 19.