I’ve already provided you with some tutorials dealing with composing C64 music with Goattracker. But if you are interested on actually coding what you are hearing, then this article may be of help.

We will start by just playing a note. Nothing very exciting, but many concepts are required even for this very basic task.

I’ve already introduced musical notes and very rough music theory concepts on the Goattracker tutorials, so if you need to dust off such topics please refer to them.

To make the SID chip play a note, we must know what frequency matches that note. The following formula will be of help:

​\( n \)​ is the number of half steps from the reference note. It can be either positive or negative. If the note we want to compute the frequency of can be found on the piano keyboard before A4, then ​\( n \)​ will be negative, otherwise it will be positive.

For instance, if we want to compute the frequency of C4, we have:

We must note that physical frequencies values are different from the values used by the SID. In particular, the SID frequency ​\( f_{nSID} \)​ is:

To make things simpler, we can just take:

and use this value as the reference value, instead of 440 Hz. The program that will be presented at the end of this article will just do this.

Note: you may wonder why the SID frequency value is not the same as the phisical frequency value. As we can obviously poke only integer numbers in memory, the factor 16.94 acts as some sort of integer math offset. This way, despite the use of integer numbers, we can adjust the frequency of a note with a resolution of 1/17 of a hertz. This allows for very fine tuning of sound frequency and very smooth portamentos. This is something that really sets apart the SID chip from other home computer audio chips of the time.

Playing a note with the SID chip

Now, let’s have a look at the easiest way to play a single note with the Commodore 64 SID chip.

SID registers are used as a means of communicating with the SID chip. Those registers are mapped on RAM, just like VIC-II registers, so playing a note is just a matter of putting some values on RAM memory. And as we know, the POKE instruction is just what we need for that.

Each sound has a volume, a waveform, an envelope and, of course, a frequency.

On a SID chip, three voices are available. That means, up to three notes being played at the same time are possible. However, we will only use voice 1 for the moment.

So, to set full volume we code:

Of course, we are assuming the variable S has been assigned the value 54272 already.

The waveform can be seen as the shape of a sound. On a SID, we have four waveforms available. On this tutorial, we will only use two waveforms: triangle and sawtooth. For voice 1, those waveforms can be selected by turning on bit 4 and bit 5 of register 54276 decimal (S+4 using the variable S for SID base address).

However, instead of POKEing the waveform value on that register, we will just store it on a variable called WF. Why? It will be clear in a few moments.

So, if we want to use triangle waveform, we will code:

And, if we want to use sawtooth waveform, we will have to code instead:

The envelope may be seen has the way the volume changes while a note is being played. When you start a note, you may suddenly hear it at full volume. Then, when you stop that note, you may have it just disappear instantly. This is the behaviour of an organ. When you press a key, you just hear the note at full volume. As soon as you release the key, the sound stops instantly.

But, other instruments have different behaviours. For instance, on a piano, even if you keep a key depressed, the note will eventually fade away. So, a piano has a different envelope than an organ.

A volume envelope has four phases:

Before we can play a note, we still need one last thing.

The gate bit: our way to depress a key and release it

If you want to play a note on a piano, you need to depress a key and then release it. This is easy to do on a real instrument… but how it can be done on a SID? The gate bit is what we need.

So, we are forced to code something like this:

will turn on the gate bit and will set the required waveform at the same time, hold by the variable WF.

will turn off the gate bit maintaining the desired waveform. This is important, otherwise another unwanted waveform may be used on the release phase!

Of course, WF+0 can be replaced with simply WF. But, I have added a 0 just to make it clear that we are setting the gate bit to 0.

Now we have all we need to play a note.

This simple program will play a C4 note using sawtooth waveform on voice 1.

You will find many comments on the code while listing, for your convenience. 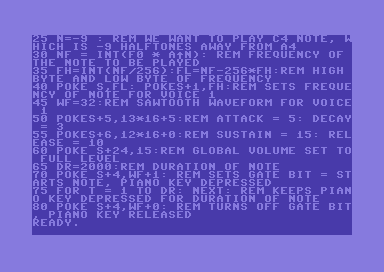 The note being played can be changed by adjusting the value of line 25. For instance, if you want to play a C5, you will just need to assign N the value 3. In facts, C5 is 3 half-tones past A4. Changing the value of N to 5 will play a D5 note instead.

Envelope parameters are set on lines 50 and 55. All parameters range from 0 to 15, but as we already know attack and sustain values are multiplied by 16. In facts, they live in the highest four bits of their register.

The duration of a note is the amount of time the gate bit is maintained set to on. This value is set on line 65.

On line 70, the gate bit is set to on. The attack phase starts. In other words, the note starts.

After the duration loop on line 75 ends, line 80 starts the release phase by turning off the gate bit. The piano key is released. The note does not disappear instantly, as we have a value of 10 for the release parameter (please see again line 55). You may try to change the release value to 0. Then, the note will stop instantly.

This program uses the sawtooth waveform. To hear the triangle waveform, replace the value of WF with 16 (line 45).

Creating user defined characters on the Commodore 64 is not that easy from BASIC V2. Binary numbers ...