Although the Commodore 64 offers a wide range of wonderful cleverly coded games, a few titles were just rushed during development. Despite the great sound and graphics capabilities of the C64 (for the time), some games indeed offered bad graphics and/or music, while others were more or less plain unplayable.

But sometimes, weird things did happen. Some games were apparently cool, but they had some nasty things hiding inside them. Robocop by Ocean is one of those games. 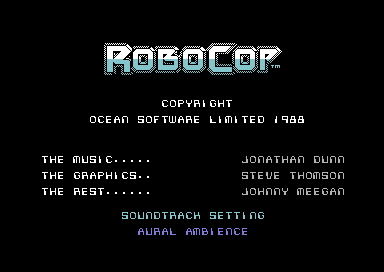 The Commodore 64 Robocop game by Ocean was clearly rushed during development. They just needed to get the game on the market as soon as possible so that they could rely on the success of the movie. And I think this game sold well, at least at the beginning. But, it just didn’t offer the quality that one could expect for such an important title.

Developers did start with the idea of creating a good game. Music is very good and graphics offers colourful detailed sprites, thanks to the hi-res sprites overlay technique. Music by John Dunn offers quite complex sounds in my opinion, way above average C64 music of the time. 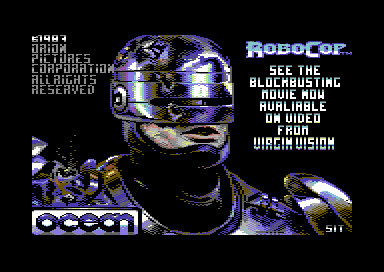 But sadly, things start to turn out wrong since the very beginning. Right after you press the fire button to start the game and you suddenly pull the joystick to move the main character to the right, you immediately notice that Robocop just slides too fast towards the right.

After you play the game for some seconds, you suddenly realize that the difficulty level is set way too high. You just have one life and your energy runs out very quickly as soon as you get hit by your enemies. You can eat baby food to get some energy back, but still, it’s not easy to keep your energy level high.

Another odd thing is that you are not able to fire upwards without jumping. That just makes the game even more difficult, as you can get shot more easily because of this problem.

Level 2 is quite infamous. It is not easy to get the hostage free, as excellent shooting is required to kill the bad guy. The time limit is so little that even if you manage to accomplish your task, you are hardly able to get any seconds left. I don’t think I managed to end up with more than 4 or 5 seconds left. I can always pass that level now, but I remember it was very difficult back then.

Maybe developers made that level nearly impossible to complete on purpose, so that you couldn’t find the other bugs that were waiting for you in the remaining parts of the game. Anyway, the trick to be successful on this level is to set the proper height of the sight very quickly, then keep shooting at the face of the criminal, carefully trying to mimic his movements. Don’t shoot at the hostage, otherwise you will loose energy.

Level 3 is not very difficult, but it can get very frustrating due to the motorbikes. If you don’t have the right kind of weapon, shooting at them effectively can turn out to be a nightmare. The infamous three-shots weapon just seems to be unsuitable for that – so try to avoid getting it if possible.

In an effort to find out who killed his former self, on level 4 Robocop must complete an identikit. Again, the time limit is very tight and you are only allowed a fixed amount of mistakes. But, usually, failing to complete this part doesn’t prevent you to reach the following level.

Graphics seems to be quite good and it makes use of the hi-res mode. However, some details are missing and there is no animation when you complete the match.

Level 5 is just a nightmare and I never managed to complete it. I just find it way too difficult, as it’s very easy to get shot by enemies while going upwards or downwards. Still, if you happen to touch an enemy, you loose a lot of energy.

To escape from the factory, you have to hit a wall repeatedly.

With cheats, I had a look at the remaining levels. Level 6 seems to be quite hard, as you have to battle against the terrifying ED209 with your bare hands. But level 7 is just what makes the game impossible to complete, as it is completely bugged.

You can’t just see any programmable characters made graphics, you only see sprites and a lot of garbage on the screen. It’s just unbelievable that they put a game on the market with such a big bug. That’s what they were trying to hide by setting the difficulty level so high on previous levels. They clearly didn’t want you to reach this faulty level.

They were just on money and instead of delaying the release of the game, they decided to release it unfinished. They simply couldn’t allow the importance of the movie to fade, otherwise sells wouldn’t have been as strong as they needed. They just couldn’t care of the honour of the Commodore 64.

Levels 8 and 9 don’t have big bugs. The game ending seems to be quite disappointing however. Still, on level 9, if you kill the hostage, graphics gets corrupted.

Overall difficulty and the bug on level 7 just make the game nearly impossible to complete. Some fixed versions of the game were released by sceners however.

The Commodore 64 game Cabal (European version) is a nice port of the original arcade game developed ...