Again on random numbers. This time, we’ll have a look at how to generate fractals by using random numbers. It may seem strange, as random numbers don’t have a rule. They just are wild, and if you use them to draw points, those will pop up everywhere without any kind of rule.

This wild behaviour of random numbers is know as chaos. At least, this is a rough idea of the concept.

But how can we draw fractals by using random numbers? Fractals have a rule, have an order in their points, they mostly have self similarity… In a way we are pretending that totally screwed-up guys would design something perfect. But hey, sometimes that happens in life!

And so yes, we can make order out of disorder. We can draw a fractal out of random numbers. But still, all of this doesn’t come from complete magic. In fact, we need at least a rule on how to “chose” those random numbers.

Stage 1: creating a random point inside a triangle

Imagine you have a triangle. The first thing to learn is drawing random points inside it. As I never did such a thing, it was a bit difficult for me to figure out the required piece of code.

The point is not just figuring out a properly working code… but something reasonably fast for BASIC. So, forget things like: we create a random point, we draw lines connecting that point to the vertexes of the triangle, then we check if any of those lines intersect with the triangle… not what we need. 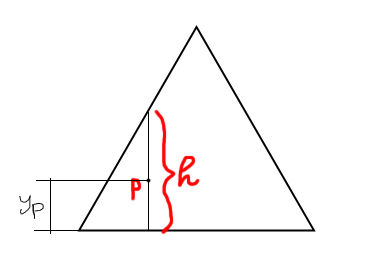 If that is the case, the point is inside the triangle. If not, it is outside and must be discarded.

But how do we compute h? From simple trigonometry we can say: h = xP / tan (pi/6). So, if we know the x-coordinate of the random point (and we do know), we can calculate h with ease. And a random point will be inside the triangle if its y-coordinate is less than h.

h can be seen as the height of a small right triangle inside the main triangle. So finding h is just a simple matter of triangle trigonometry, as shown.

Although any vertex is chosen totally randomly, what you’ll get is something that looks very close to a Sierpinsky triangle fractal: 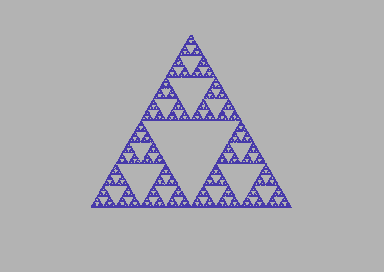 Will the same work on a square? Yes, but you have to modify the code so that the same random vertex cannot be chosen twice in a sequence. And on a square, the checks for inner points are much easier. Here’s the result: 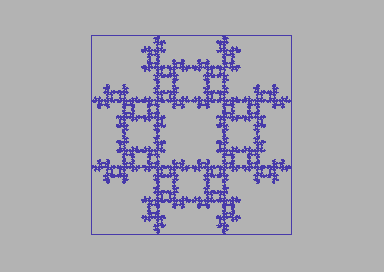 Here are the two BASIC programs drawing the fractals. Those are all but fast. So, better to run them with warp mode on emulators or with some kind of accelerator on a real machine. Still, it’s a matter of waiting some minutes, not hours. An assembly implementation would be quite the right thing, but I am lacking time for it nowadays.

The code is something old, something new. The bitmap handling routines are just the BASIC versions of my previous assembly line-drawing routines. I tried to optimize this part of the program the best that I could. You have to wait at the beginning for creating plotting tables, but the speed improvement while plotting points on screen pays for that initial wait I hope.

There are two programs in the directory, each drawing a single fractal. Let’s have a look at the code of the fractal with triangles.

A brief tour on the code

The subroutine from line 240 is the one responsible for creating a random point. After creating it, it sets the flag PF to 0 or 1, according to whether the point is inside the triangle or not. This way, the main program can call the routine again if needed, until a point inside the triangle will be found.

Line 242 checks if x-coordinate of the random point is out of range. If so, it adjusts XR coordinate so that it is between the width of the triangle.

Line 244 creates a variable XK. This is needed, because if we need mirroring XR, we must not loose the original value of XR. The mirroring takes place when XR is greater than 160, as we are in the right-half of the triangle. If we didn’t do so, the computed value YC on the following line would have no meaning.

Line 248 sets the flag for inner point according to results.

Vertices coordinates are now stored on a real array. At this point, a random index to pick up an array element is generated, so that a random vertex can be selected.

Finally, the middle point between the random point and the vertex is calculated and plotted. The program then jumps back again to line 340, plotting more and more points of the fractal.