A very classic topic is the ability to recover a BASIC program that has been killed by an unwanted NEW command. For instance, it may happen that someone issues a NEW command and then realizes that the program has never been saved.

Simons’ BASIC did provide a command to recover a deleted BASIC program: OLD. But, if you are using BASIC 2.0, such command is not provided. But, a simple machine language program will do the job.

What the command NEW really does

So, the NEW command fools the interpreter so that it THINKS no BASIC program is in memory. But actually, it’s still there.

So, we have to scan the “dead” program in memory, and we must find:

Here’s my simple solution to this very classic topic. My program is not short, nor optimized – but at least it seems to work. And it should be quite easy to understand for beginners or for people needing to dust off their knowledge in 6502 assembly language.

To better understand the code, it may be useful to note that the first four bytes of any BASIC line – as it is stored in memory – have a special meaning.

When looking for the end of the first program line, the routine must skip these four bytes.

Source code (txt file, use notepad++ to view it)

To recover the apparently lost BASIC program, you only need to load this utility, then type SYS 49152. Your program will be back. 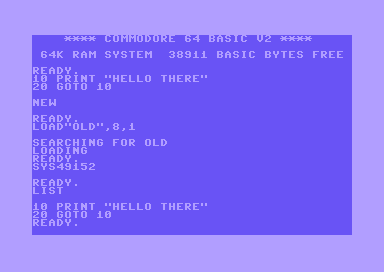 I like self-modifying code, but this time I didn’t use it. I have used indirect, indexed mode. By the way, instead of using the y register as an index, I have decided to directly increment both $fc and $fd zero page locations, used for the indirect address. It may seem odd, but I think it makes things much easier in this particular situation.

The UNNEW utility from Compute’s Gazette

Today I just wanted to try my hands at a problem that has been solved ages ago. And of course,the authors of Compute! did provide a solution at the very beginning of the Commodore 64 era.

I’ve found a program solving this problem in the issue N. 05 of Compute!’s Gazette (page 132).

I’ve typed in the program, tested it and compared with my own program. This program is much shorter than mine and works on the Commodore VIC 20 as well. But it was some sort of challenge to code my own solution without looking at the code from Compute!’s Gazette.

Here’s the program from the magazine that I’ve typed-in for you, and here’s the routine taken from the VICE machine language/assembly monitor. 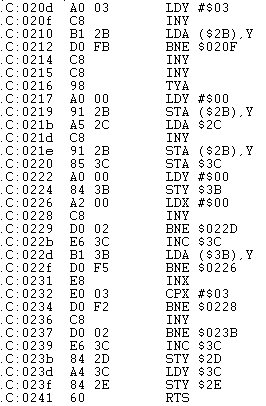 On the late few days, I have been following an eBay auction dealing with a nearly mint fully working ...