After one year wait I finally decided to buy The C64 mini. Price was the main reason for the purchase delay. 79 euros seemed a bit too much last year, but since a C64 mini can be now bought for 37 euros, I didn’t wait any longer. Is it a new Commodore 64? Certainly, it isn’t. Despite the good looking case reproducing quite well the likes of a true Commodore 64 first series, what’s inside it’s not a Commodore 64. Rather, here we have some sort of scaled down computer board running Linux and the X64 Commodore 64 emulator from VICE 2.4.

So, the mini is not a reimplementation of the Commodore 64, like the DTV was. Evaluating the C64 Mini in terms of performance is just telling how good this microsystem is as a Commodore 64 emulator.

The C64 Mini comes with a good packing, a manual, HDMI and USB cables. Power supply is not included (a good +5V 1A power supply will do). There are 64 games built in. Some games are nice and famous titles like Cybernoid I and II, Impossible Mission, Monty on the Run and Boulderdash. Many good titles are missing in my opinion, so the ability of adding more games is quite important if not crucial.

Since the launch the firmware has been updated so that adding new games is quite easy. Information on firmware update can be found here. For storing games you just need a flash USB drive (FAT 32 formatted). You can put .prg or .d64 files of your games on the USB flash drive, then connect it to the C64 mini. An USB pen drive icon will now appear on the game carousel screen, allowing you to start up the games you added by the file loader.

One important thing: by default, the C64 mini will load games using fast disk mode. This is incompatible with most games using disk access. So, we must tell the Mini to use accurate disk access (true drive emulation in VICE) so that most if not all custom loaders will work.

The easiest way to do this in my opinion is to add the suffix _AD on game names on the USB flash drive. So, for instance, Cabal.d64 should be renamed as Cabal_AD.d64. This way, the Mini will know that it must use accurate disk mode.

As far as I can see, renaming cannot be done from the mini, so it must be done on the PC side.

By default, The C64 mini assumes port 2 is used by all games. So, if you want to play with Outrun for instance, you must add the suffix _J1 to the .d64 file name, so that the Mini will allow you to use the joystick for that game. Suffixes can be combined, so that if we want to use accurate disk access and joystick port 1 for a given game, we can rename the .d64 like:

Still, emulation is quite good and runs with no slow downs. I tested The C64 Mini on both modern TV sets and on an old CRT TV by using a cheap HDMI to SCART Converter. Using such a converter, the Mini offers a good image, as it supports 4:3 format. This is better than the NES mini, which does not allow you to have a full screen gameplay image on CRT TVs.

Using multidisk software is not a big pain either on the Mini. It doesn’t provide any form of native disk attaching feature, but a simple workaround will do. You must create on the USB flash drive two folders, each of which containing one disk side. Now, you can name the folders as you wish (for instance, gameside1 folder and gameside2 folder), but the .d64 files MUST have the same name. So, you must rename the files so that for instance gameside1.d64 and gameside2.d64 will be both renamed as game.d64. You will recognize side1 and side2 disk files by the name in the folders.

Now, you just start the file in the side1 folder by using the file loader from the mini as always. Then, when the game asks for disk change, you must do the following:

After that, just follow the instruction on screen and the game will load successfully from the second side of disk. The process works fine for more disks as well. I successfully tested the 3 disks demo “Unboxed”. 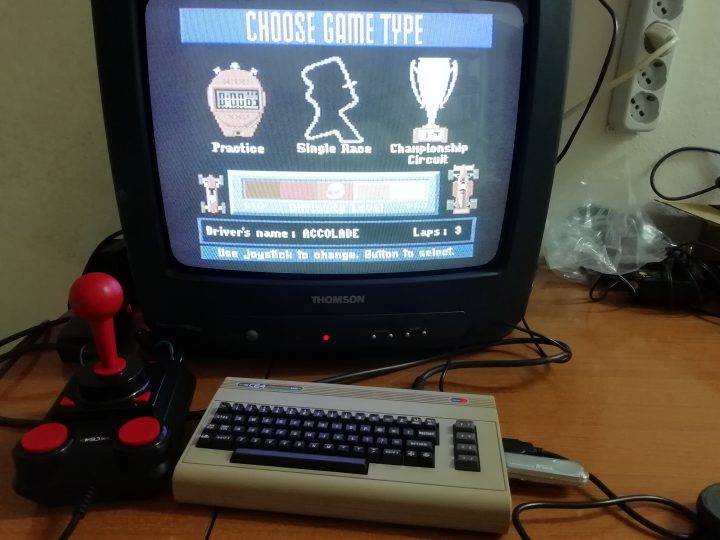 Skipping intros is not that difficult. You just need to use the virtual keyboard. Once you activate it, space bar is the triangle shaped button on the joystick to the right.

I am quite happy about visuals and audio. Quality is good and you get rid of the luma issue. But maybe, for good old times feeling, an emulation of this flaw may have been good. However, CRT emulation is offered by the way for modern TV sets.

As a sad note, the joystick is quite a nightmare. It is too hard on the hands and it needs a plane surface to be used. I hope a much better joystick will be provided with the full size TheC64 coming in December 2019.

Although just an emulator, The C64 mini is a good space saving solution. Just look at the following picture: So, is the C64 Mini worth buying? For the current pricing, I would definitely say yes, even if I am quite fond to original hardware and I still use old floppies. What’s missing? Well, I have many ideas that maybe could be nice for the full size The C64. For instance, a better options screen which will allow to swap disks with ease, sid and vic models selection, a fine working true drive emulation option and many more things that VICE emulator on PC offers. And I also think that being able to connect original Commodore peripherals (at least a 1541 disk drive) would be just lovely. But I don’t think this feature will be offered.

And as a bonus, I think that a Sidplayer utility would be quite nice, so that you can use the Mini to listen to your favourite SID tunes. OK, this is possible on both PC and C64 since ages but still, I think it would be a nice add-on for the Mini.