Some days ago I found the Nintendo Entertainment System Mini on a local store and I just couldn’t resist. So I bought it.

The Nintendo Classic mini NES comes with 30 games and it is very good looking. It is a quite close replica of the original but very small in size. Of course the cartridge opening is fake, but I think it would have been nice to have mini cartridges available as well (OK, just kidding).

The joystick is an exact replica of the original (but with a different connector). As you can see, the controller is the same size as the console.

The NES mini sports an HDMI cable so that it is possibile to connect it to modern TV sets. A smartphone charger is enough to properly provide power to the unit. I have been playing with it for some days and I have to say that NES games are quite nice. Although the HDMI output is nice and a CRT emulation option is provided by the NES mini, I have tried to use it with an old CRT TV, in the hope of getting a more old-stilish image. It proved much more difficult than what I have imagined, and still I have to get things improved.

For the task, I used an HDMI to SCART adaptor: To my surprise, I couldn’t get a good image nor I could get any good sound either. The image was very, very confused and the sound had a very high background noise.

In order to get a good image and a good sound, I had to cut three wires on the scart cable:

After that mod on the scart cable, I could get those images: As you can see, the game carousel screen is OK but the actual NES gaming screen is quite reduced on horizontal direction. So next step for me will be to figure out how to get a larger image of actual game play, if possible. But still, despite of this problem the image is more enjoyable than on modern led TV sets. CRT TVs have much less resolution and offer color distorsion which is actually a benefit for old computers and consoles.

As a sad note, the output image offered by this setup has some flickering so it may be a bit stressful on the eyes. Maybe this is due to the fact that 60 Hz output is provided by the mini, while PAL standard used on my TV set has 50 Hz frequency.

The mini makes use of an R16 SoC with four ARM cortex A7central processing cores and an ARM Mali 400 MP2 graphics processing unit. 512 Mb of flash storage and 256 Mb of DDR RAM memory are also included. Let’s have a look at the internals.

To open the NES Mini, just remove the rubber feet on the bottom, hiding four screws. A small screwdriver is required to remove them. And here’s what we first find after the unit is opened: 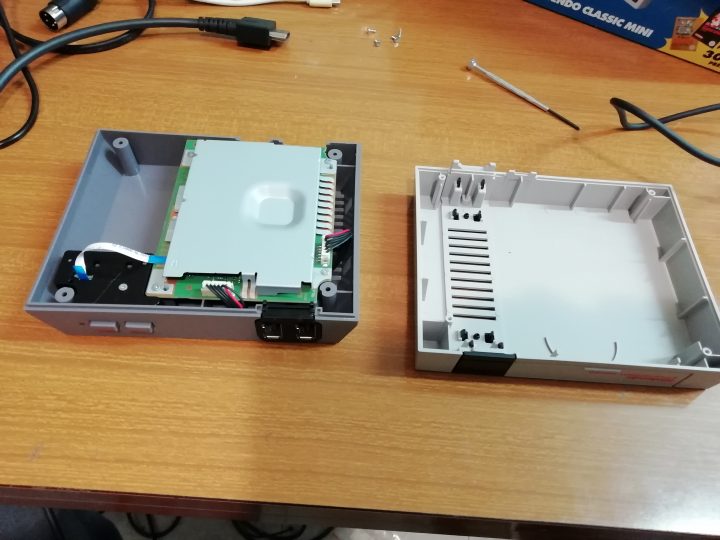 The metal heatsink is for the R16 SoC chip. It should act as a radiofrequency shield as well, to avoid interference of the console to the TV set.

After removing the heatsink, we can finally have a look at the Nintendo Nes Mini board: The R16 is the bigger chip on the right. Controllers connections can be clearly seen. 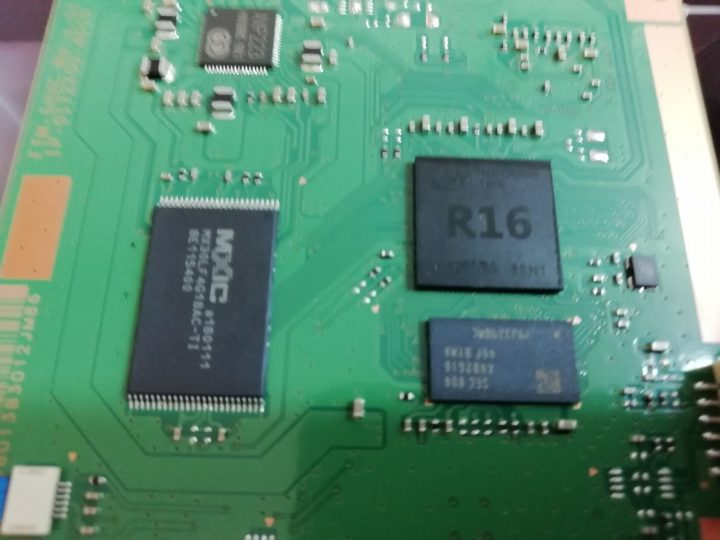 As a final note, here’s the board that can be found inside the HDMI to scart adaptor that I bought: I don’t know if it is possible to get a larger image for game action, but still, I am quite happy with the output I could get on CRT.

30 games may seem not enough, but new games can be added to the Nintendo Mini by using the utility Hakchi 2.

The Mini NES offers a good emulation of the original system and with its reduced size it is quite handy. I don’t own an original NES but, despite the Nintendo Mini being so nice, I think that I will get an original NES in the future.

The C64: the new Commodore 64 by Retrogames